Folks, and now it is time for me to ramble about my life at the moment.  It’s been beautifully fall like, with the leaves teasing us by not changing colors, as of yet.  There are a few, but only a few.  I’ve been enjoying my sweatshirts again, and wearing my beanies.  Life has been good.

My dad was on vacation last week, and whenever he’s on vacation, we get a break from school, and get to do a lot of fun things.  Not only was Dad off work, but my older brother celebrated his birthday, which was a blast.

Since I don’t have a working camera at the moment, I borrowed my dad’s phone, so I apologize if some of the photos didn’t turn out.  Now, on to the first stop on our fun week. 😉

The zoo!  We always have fun at the zoo.  At least, until it becomes lunch time, or I’m done. XD  I enjoyed the birds of prey a lot.

We also went to the petting zoo, and I adore those animals.  Sadly, (Or maybe not sadly) they’re my favorite animals in the zoo.  Rose and Mr. Goat had a good time together.  (Aren’t goats SOOOO cute? 😍) 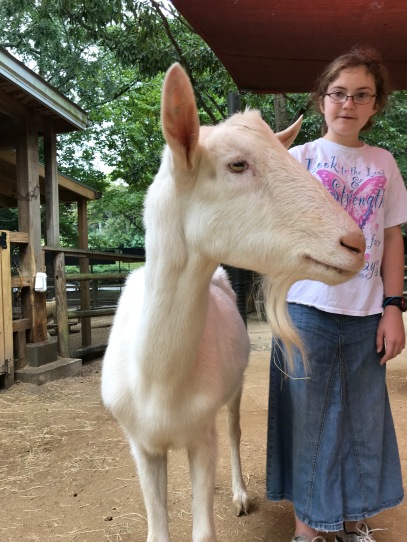 I adore Nubian goats, and this dear goat didn’t mind posing for me.  Isn’t she the sweetest looking thing ever? 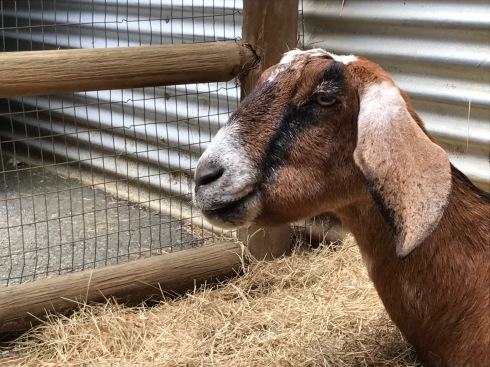 My younger sister decided she would give up horseback riding, and ride Komodo dragons instead. I think it’s a bit risky, but you never know, she might be good at it.

It was a fun day, and we brought a friend along, who made my little sisters very happy.  I had decided to wear my only black boots, which are rather, um, not conducive for long walks?  So, my feet were just a tad blistered after walking EVERYWHERE in the zoo.  I liked the flowers they had at the zoo.

For lunch, my mom packed her delicious usual of sandwiches, salami, and strawberries.

We saw a lot more animals, but I’m positive y’all don’t want to trail around the zoo with me. XD  I also enjoyed seeing the Diamond Back Rattlesnake again, but I think I was the only one.

The day after that was Senior citizens day at Goodwill, so we dragged my dad along, who’s actually that old. XD  I had a wonderful time putting Kate’s post into action.  I had a pile of books a mile high, but I limited it down to three books for myself, and some for my brother.

I bought “Rebecca of Sunnybrook Farm”, “Unbroken”, and “The Hiding Place.”  I’ve read the first two, and they were both AMAZING.  *booklover swoon* Ah,   I’ll give you Rebecca’s review later on in this post, but “Unbroken” is now one of my top favorite books.  If you’re sensitive, I would not suggest this book.  It’s about POWs, and just general awesome nastiness that makes you appreciate Veteran’s Day ten times more.  I (soft-hearted me) almost didn’t finish the epilogue because Pete ends up dying, and that made me have a regular crying match hidden away.  BUT IT’S SO SWEET, and such a wonderful testimony.  I totally recommend it.

The next morning, my dad, brother and I loaded up in the car and drove for an hour.  It was a nice car ride, and I read “Rebecca of Sunnybrook Farm.”  I’ve actually never read that book before, and it was delicious.  A better “Anne of Green Gables,” honestly.  Now, it’s not as good as some of the Anne books after the first one, but the first one it surpasses.  The beauty of the story was captivating, and made me laugh, and giggle, and oh dear.  I’m just going on and on. XD Usual, when it comes to good books.

Some people from our church met up with us at the gun range, and out we walked.

I was the scope-er for most of the day.  I got two burns, and goodness!  Do those hot cartridges burn!  I learned to sit on my hands, and stay out-of-the-way rather fast.

Honestly, the .22 was my favorite.  It was modeled after a carbine used in WWII.  Sadly, we didn’t shoot the M1 Garand, which I really wanted to shoot.  We did shoot the Enfield, though.  My brother shot a shotgun, but honestly, I wasn’t interested.

All together, it was a wonderful day, even though I didn’t get lunch and was a monster because of that. XD

On Sunday of that week, I was playing football, like usual, with my brother, when my dad tackled my brother and threw me the ball.  I wasn’t ready to catch it, but I tried anyway, and it collided head on with my left ring finger.  As soon as I felt it, I knew something had just happened to my finger.

I grabbed some ice, and we scurried into the car, since it was almost church time.  When we got to the church, though, my mom told my dad that I needed to go to the ER.  We went home, and left my family there while mom took me to the ER.  The doctor there was hilarious!  He looked like a mad scientist, but he was really cool.  They did X-rays, and told me that it wasn’t broken.  (The Doctor also told me I was the perfect girl–A writer, musician, and six feet tall! O.o That was a first. XD)

They buddy taped it, and told me that if I wasn’t able to bend it by Tuesday, call a hand specialist, because something might be torn.  Tuesday was my brother’s birthday, and he had a ton of fun.  I didn’t, probably because I was in pain even when taking pills.

We went to a garden, and it was very green, and there weren’t very many flowers.  Besides that, it was pretty nice.  Wednesday we called the specialist about my finger, and they told me I would have to wait a week until I could have an appointment.

Thankfully, over that week the swelling began to go down, as did the pain.  On Monday, the day before we went to the specialist, my siblings and I went to a Civil war prison.  It had the coolest POW museum, and I enjoyed it.  I’ve been doing a lot of research for my book for NaNoWriMo, and POWs have been a huge part of that.  So, yeah.  If you don’t like grossness, things worse than nightmares, and that general stuff, POW research isn’t for you.  BUT it makes you appreciate our liberty, freedom, and the cost of that even more.

Anyway, we went to another museum, and outside of it they had those fun things that you can put your face to.

So, at the specialist, the did another X-ray, and looked all over my hand.  I’ve torn my top tendon, and so?  I have the most wonderful BRIGHT blue splint that I’ll have to wear for three weeks.  But!  The good part is that I can still play piano…I just have a club on one finger. XD

That’s what’s been happening in my life.  Now, I must stop so I can do the last-minute things before NaNoWriMo begins.  Are y’all ready?