And welcome to another pros and cons post!  If you checked out the other post here, you’ll know I have a plan to make this a series.  Anyway, today is the pros and cons of…Being tall!  Yep!  I thought about doing one about being short, but I’ve never experienced that, so I just decided to go with this one.

As an intro, I am roughly six foot with boots on, so I am tall for an American gal.  I usually like to add a ten gallon hat though, just to make me look taller. 😉 Anyway, on with this post!

You get told the same thing ALOT!

“Oh, you actually are tall!”

Okay, this is actually one of my pet peeves, but I’m getting over it.  It’s not like people say to short folks, “Oh, wow!  You’re short!”  And why does height have to correspond with age?  I don’t know, maybe that’s just my experience.  Let me advise you and do a favor for all other tall people.  We know we’re tall.  You don’t have to tell us.  We’re told that more than enough. This is a real con, though.  😕

You don’t have to climb on stools or counters.

I can reach a lot of things.  My mom and random people at the grocery store get me to reach for them.  I often forget how smaller people reach things.  The other day I saw a friend climb up on the counter to reach the cups and I was like, uh, what are you doing on the counter?

Her answer?  Not everyone is tall or blessed with long arms.  I guess I’m super blessed.  😉

You have big feet.

Yes, this is a con.  The bigger your feet, the harder it is for you to warm them!  They’re all the way down there…And all the way out there.  Anyway, also for me as a girl, it’s hard to find shoes that fit.  I have narrow, long feet.  Yep, I wear guys shoes.  My running shoes are a men’s 12.  No, I’m not kidding.  Someone actually passed them on for my brother, and I said, “Sorry, they’re mine.”  I think the poor person was thunderstruck I could actually fit them.  My boots are all men’s 11.  Welcome to the world of big feet!  You’ll never wear heels either.  Who wants to be six foot two?  Also for this con, you’re called Bigfoot all the time.  My mom affectionately refers to my feet as boats.  😂

I don’t know how many times I’ve been stopped at conferences and stuff to be told, “Wow!  You’re tall!” Or “I like your hair.” Or “Nice boots.”  I’m like a whole head taller than most ladies or more, so I guess I’m pretty noticeable.  Anyway, it’s a huge benefit.  Also, you always read books about tall people being imposing and leaders.  I hate being the leader, but the idea of being imposing sounds nice.

“How’s the oxygen up there?”

Yep, that’s really been asked me before.  Recently I was told that I couldn’t be a pediatrician because I was too tall.  I guess I would scare away the kids??  Anyway, this is a pretty weird con, but a con none the less.  I honestly don’t want to be a runway model, or a basketball player, and no, I don’t think volley ball would be up my alley.  Olympic swimming?  Not exactly what I plan for my life.  Can’t I just write or act?  I’m too tall for acting?  Okay, well, it seems my dream has just bit the dust.  😂  Yes, I actually do like being taller than your brother.  No, I have no clue how I’ll find a husband.  I’m not sure if being successful really has to do with height, but if it does, I seem to be on my way to success.

Maybe y’all get the idea?  It’s been going like this for my whole life.  And just because I’m taller than you doesn’t mean I’m older than you.

People are wary around you.

Okay, I’m not sure if this is a pro or a con, but it is what it is.  I’m usually left out of the cliques and stuff because the saying, “Birds of a feather flock together,” is true.  Guess who I talk to the most?  Guys around six feet tall.  😂  I just follow my brother around and talk with the guys he talks to.  I’ve learned a lot about shotguns, politics, and other stuff that way.  But shorter people usually don’t look me in the eye (Must be uncomfortable to look up) unless I’m sitting down.  I must be scary.  🤔

Clothes being too short…

Yes, this is so real.  I ordered this dress, and it was to the person’s shins in the picture, but on me it goes right about the knee.  It’s true.  Finding jeans, PJ pants, or leggings that don’t show my ankles is really hard.  Here’s a tip I use.  I just look and see which pair of pants are dragging on the ground when they’re on the racks.

Dresses are the hardest, though.  It’s kinda sad, because I like dresses, but it is what it is.

Always being able to see over people’s heads.

At plays, in lines, and just standing there in a crowd…You can see a lot that a smaller person wouldn’t see.  I never have the problem my friends complain about when they say they can’t see over this person’s head.  But then I feel sorry because I’m the one causing that problem to someone else.  Doesn’t that make you feel bad?  I mean, just put yourself in my shoes.  (Haha, they’d probably be too big for you). I usually try to remind myself that it isn’t my fault…

Guys, this is awkward.  Most of my friends are 5’2″ give or take a few inches.  When I go to hug them, I have to conveniently drop a few inches.  It’s just really awkward for me.  That’s why I go by a no hugging rule…Unless you’re my BFF.  I’m always like, please let’s just get the first few minutes of meeting old friends and hugging them over.  Also for this con, I’ll throw in slouching.  I know a few other tall girls who slouch, and it is SO easy to do.  I’m not kidding.  I sometimes find myself doing it when I’m with a group of people that aren’t over 5′. It’s hard being a foot taller than most people.

I’ve run out of pros…So I’m going with a con for pro number five.  Well, if you enjoy pain, this might be a pro.  (But who enjoys pain?).  I’ve had growing pains for as long as I can remember.  I can see a lot of sleepless nights in the past.  Here’s a tip for all of you who hate popping pills and think they’re tough enough to live out the pain.  You’ll be a lot less tired the next day if you just take some ibuprofen.

And that about sums up being tall!  Comment below what you want the next pro and con post to be.  Also comment if you’re tall, or if you want to be tall after reading these comments.  Have a wonderful weekend.

38 thoughts on “Pros and Cons of Being Tall” 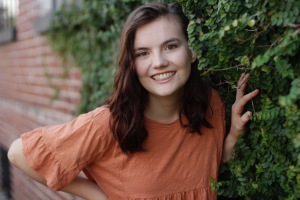